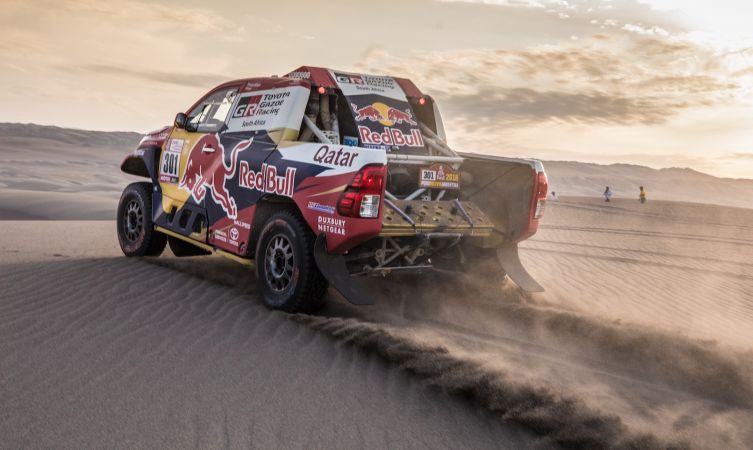 Following the start of the 2018 Dakar Rally on 6 January, stages three through five took the teams through increasingly tougher trials and to the edge of their endurance. The following reveals highlights of the efforts invested by the Toyota teams.

Today was an all-out battle, and arguably the first opportunity for Toyota Gazoo Racing South Africa (TGRSA) to measure its performance. Several vehicles experienced roll-overs and punishment over the dunes. 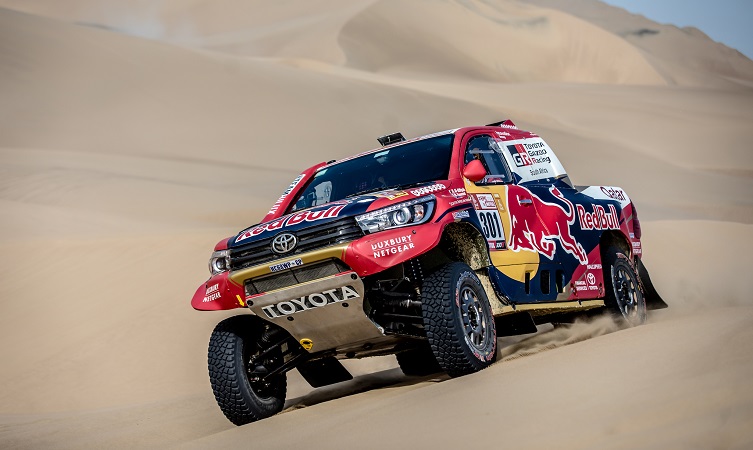 Starting in seventh place, the #301 Hilux of Nasser Al-Attiyah was in attack mode from the outset and ploughed through the tricky 296km stage to take first place, over four minutes ahead of the competition despite a couple of punctures that cost precious minutes mid-stage. It was a performance that leapfrogged the Qatari driver into third place overall. 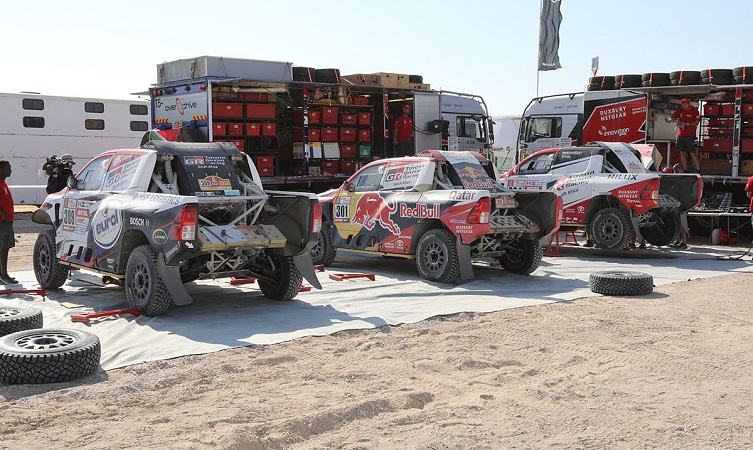 Many were surprised by Nasser’s aggressive approach to the stage, including fellow team-mate Giniel de Villiers in the #304 Hilux, who had to take the stage more carefully due to airborne dust to finish in a still-respectable sixth place. The third TGRSA driver, Bernhard ten Brinke (below right, with Giniel) in the #309 Hilux, followed close behind and finished seventh. 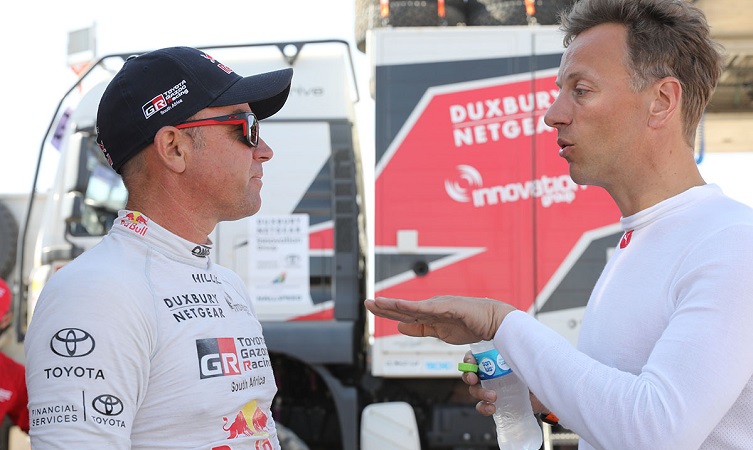 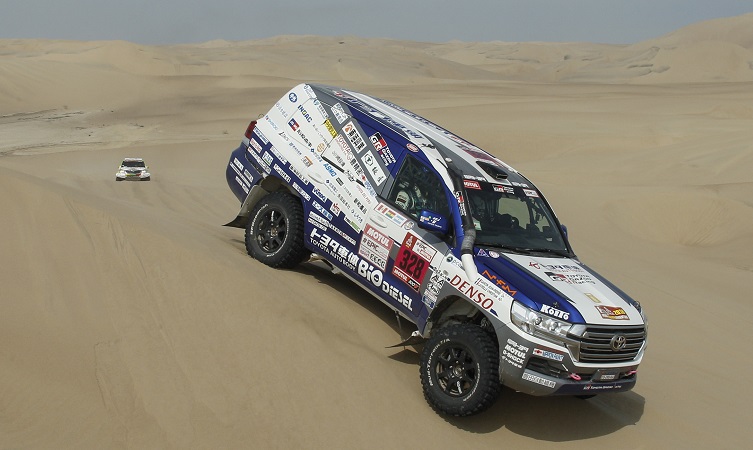 “Two wins in the first three stages sound like a fairy tale to me,” said TGRSA team principal Glyn Hall. “We simply have to keep pushing as hard as we can, and today we saw that we certainly have the pace to take the fight to the competition.”

Stage 4 turned out to be a day-long headache for most teams, the 330km route peppered with sink holes, rocky terrain and tricky canyons. Some escaped relatively unscathed, whereas others suffered critical damage. 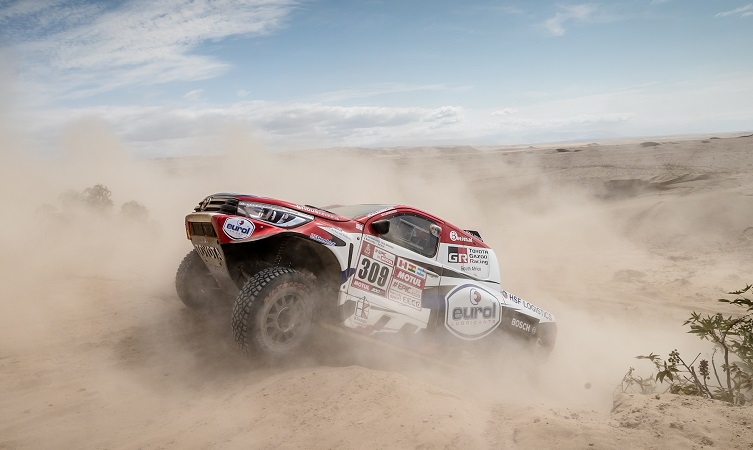 Fortunately for TGRSA, the trio of Hilux models survived the experience. Bernhard ten Brinke was the fastest works driver in the #309 Hilux, crossing the finishing line in eighth despite multiple punctures – just behind the #318 Hilux of Lucio Alvarez in the privately-run Overdrive Toyota team, which climbed to seventh place. 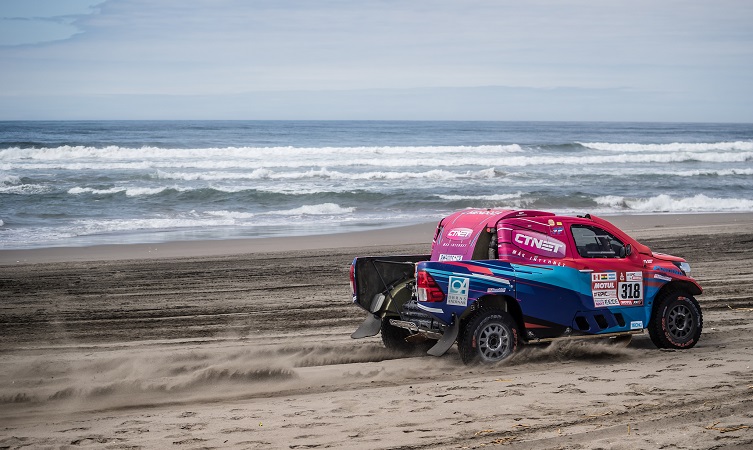 The #301 Hilux of Nasser Al-Attiyah also suffered multiple punctures that needed attention and got stuck in a sand dune – stoppages that cost the Qatari driver almost an hour. Two-thirds into the route, Nassar had run out of spare wheels and had to drive conservatively to reach the end in 11th position. Team-mate Giniel de Villiers in the #304 Hilux had similar struggles with the terrain and managed to finish in 17th place. 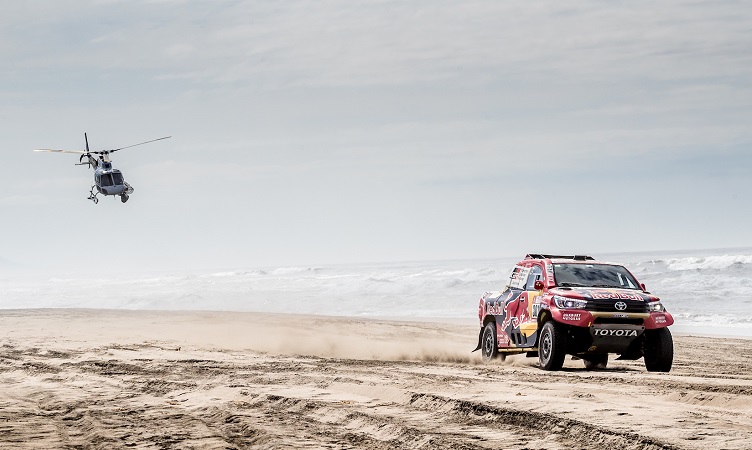 Why so many punctures on this mixed surface route? Go too hard and it becomes easy to get stuck in the sand; go too soft and the tyres tend to come off the rims in tight corners. Ten Brinke confirmed this, saying: “Without the tyre inflation/deflation system that the buggies use, we always have to compromise on tyre pressures – and that leads to punctures and getting stuck.” 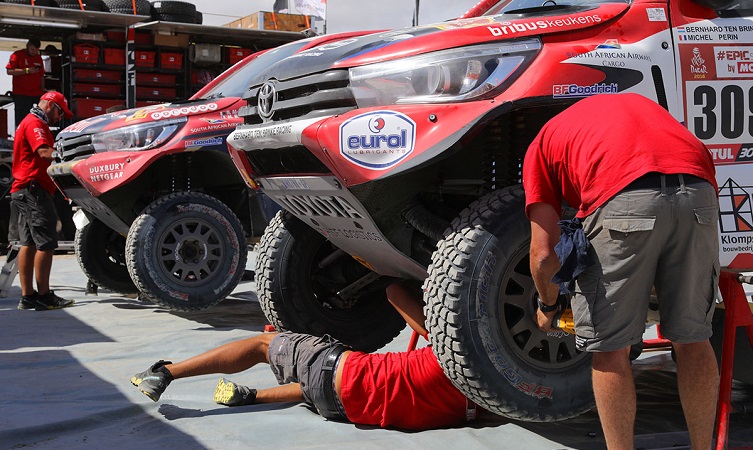 Despite some setbacks, the TGRSA team remains optimistic. “All three cars ran without missing a beat, despite the high heat experienced in the dunes today,” said team principal Hall. “That, together with the tough stages that lie ahead, keeps us positive for the remainder of the event. A lot can still happen over the next ten stages.”

Stage 5 marked the last day the Dakar was in Peru. Having already battled through the dunes for the past four days, this stage brought a new level of difficulty. Many teams suffered time losses as they struggled to free themselves from the grip of the sand but for TGRSA it was a day of welcome consolidation. 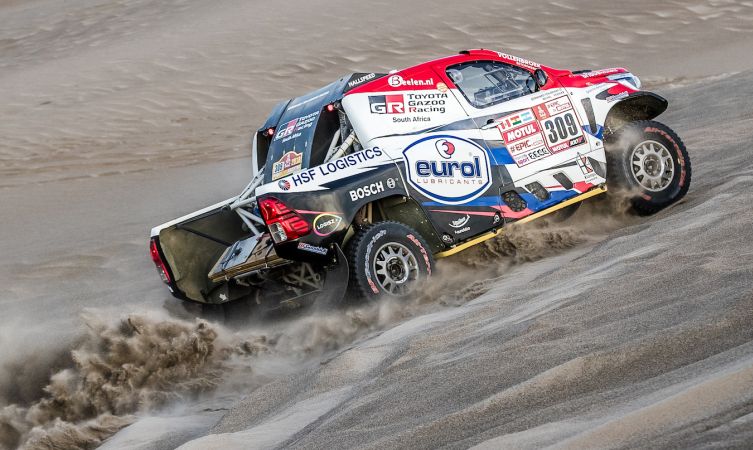 Bernhard ten Brinke in the #309 Hilux was in the groove, capitalising on his calm and calculating method to capture second place in the stage. No wonder the TGRSA rookie is turning heads and making fans within the sport. 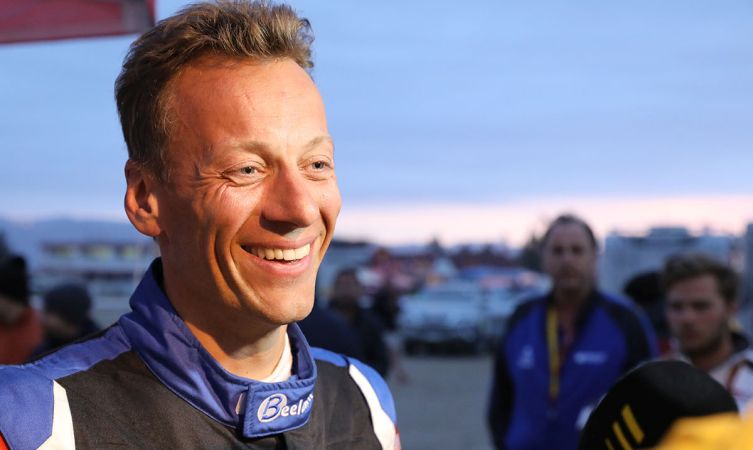 “We had a really good day today,” said ten Brinke (above) after completing the gruelling drive to the bivouac at Arequipa. “The Hilux never missed a beat, Michel was right on the money with the navigation, and it all showed in the stage results.” 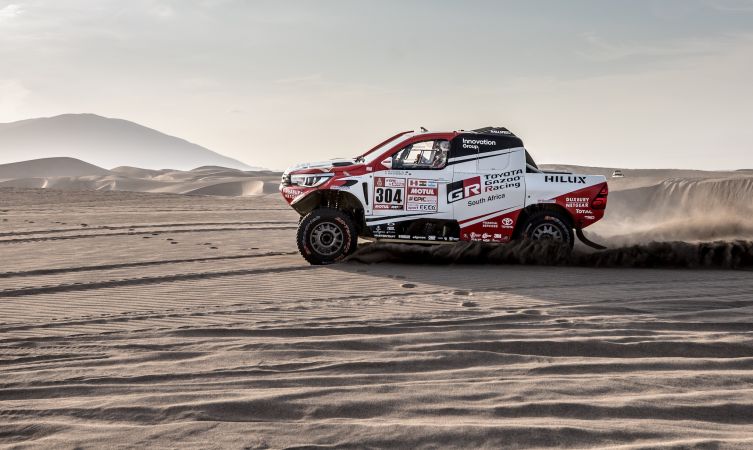 Giniel de Villiers finished third quickest in the #304 Hilux despite a flat tyre near the finish, while Nasser Al-Attiyah crossed the line in fifth after a 20-minute service to change the gearbox – no doubt happy to be finally clear of the troublesome dunes. Overdrive Toyota’s Lucio Alvarez (below) also ran strongly and consistently, placing his #318 Hilux in 16th. 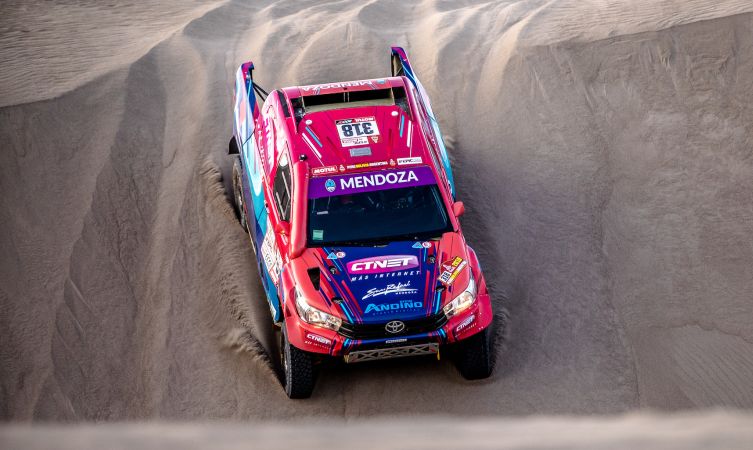 Despite early success, Peru left a mixed bag of results for TLC. The good news was that Akika Miura secured another first place in the Production category in his Land Cruiser. However, team-mate Christian Lavielle unfortunately had to bow out in Stage 4, leaving Akira to keep the Dakar dream alive for TLC. 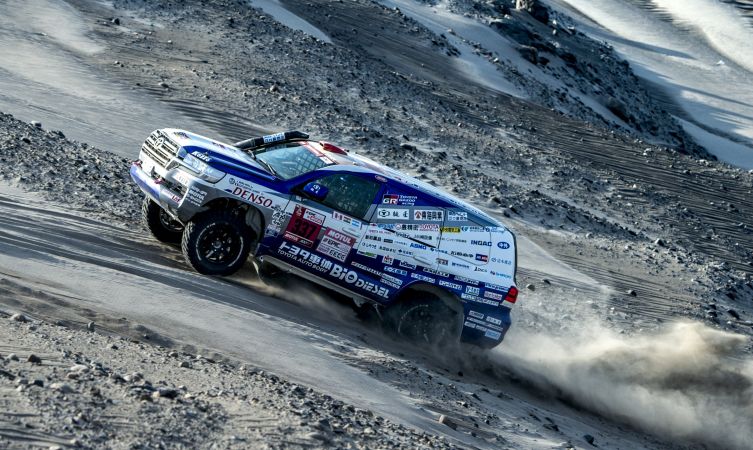 “Overall, it was a good day for us,” said Hall, from the bivouac at Arequipa. “We needed a clean run, and with the exception of Nasser’s gearbox, that’s exactly what we got. The race crews really knuckled down in tough conditions. Now we need to keep delivering more of the same, and with a bit of luck we might end up in a position from where we can attack.”

Just as the team became familiar and reasonably comfortable with Peru’s challenging dunes, the raid moves into Bolivia for Stage 6 and climbs to new altitudes and terrain challenges. Look out for our next report on Monday.