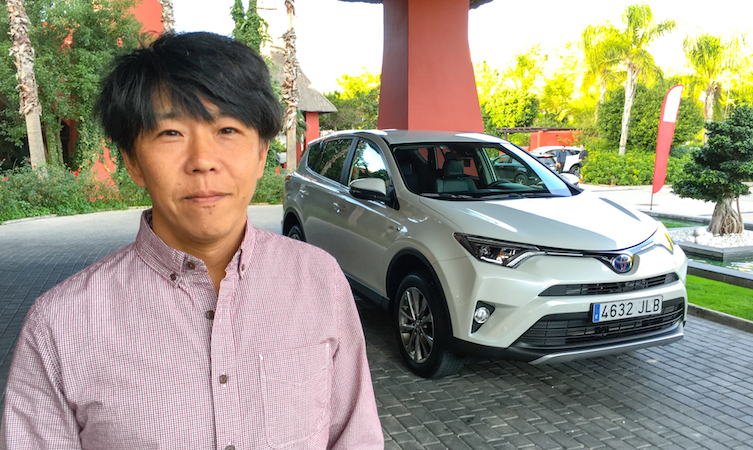 We caught up with the man behind the E-Four all-wheel drive system, engineer Yoshihiro Ikushima, to find out more and learn why it has huge potential for the future.

Toyota Blog: What was your role in developing the new RAV4 Hybrid?

Yoshihiro Ikushima: My job title is Group Manager, Driveline Unit Engineering Design. I was in charge of the development all-wheel drive system, developing the rear motor and the control.

TB: What challenges did you face in developing the E-Four all-wheel drive system?

YI: The system itself is the essentially same as what we have installed on the Lexus RX and NX, so in one respect it was simple. But if you compare the RAV4 with those two vehicles it is lighter, so we have developed the control system to give the car a more sporty feeling.

We placed the biggest focus on the tuning. The E-Four system gives a positive feeling and should allow the driver confidence – it is always ready to move forward, but it must drive in a linear and controllable fashion. It was keeping this linear feeling that we spent a lot of time on.

The concept for engineering this vehicle was something we referred to internally as the ‘power of two’ – delivering good fuel economy as well as a sporty feeling. We think we achieved a good balance of those two elements.

TB: How does E-Four all-wheel drive differ from a traditional system?

YI: The E-Four all-wheel drive system uses two motors, located at the front and rear, which work independently – so according to the driving situation you can have a torque distribution of 60 in the rear and 40 at the front. The traditional all-wheel drive system that we use in the petrol model has a maximum torque distribution of 50:50 front to rear. Being able to send more torque to the rear wheels allows for a more aggressive application of traction when necessary.

Obviously we remain very pleased with the performance of the all-wheel drive system in the petrol car, but E-Four does have distinct advantages such as this. It’s a real benefit for owners who choose hybrid.

TB: Did you look back at the original RAV4 when developing this one?

YI: To be honest, not so much the original model – obviously the fun, capable spirit is still there, but we focused more on the third-generation model as that was a big seller for us.

Because the car is a hybrid, it delivers superior all-wheel drive performance – Yoshihiro Ikushima

TB: How long did you work on this car?

YI: The hybrid system had of course already been developed within Toyota. Developing this updated RAV4 took three years in total, and implementing the hybrid and E-Four systems was part of that.

TB: Did you work on RAV4 because you worked on the system on previous models?

YI: Yes, exactly. I helped develop the system for the Lexus RX and NX.

TB: Do you think most buyers will need the all-wheel drive capability to drive off-road?

YI: As an ‘SUV-lite’, the car has ample performance, even with two-wheel drive.

That said, we expect the RAV4 Hybrid to be bought by people who lead what we call ‘active’ lifestyles – that might involve playing lots of sport, travelling a lot or driving in a wide variety of conditions. If we were to look at someone who skis, for example, they will benefit from having better performance on icy surfaces or inclines in skiing resorts – this is where the E-Four will come in useful.

The all-wheel drive also brings extra towing capacity, so if someone uses jet-skis, or boats, this is the model that caters to them. The two motors make it easy to tow.

TB: How did you test this car during development?

YI: We tested the performance by staying and working in the mountains where we saw snowy and icy conditions for two or three weeks. We did lots of tests to measure the RAV4’s performance in quite extreme conditions. It was this time last year, so one year on being in Spain for this event is a nice change!

TB: Where did you go to test the car?

YI: Toyota has a proving ground in a place called Shibetsu, which is right in the middle of Hokkaido, the northern island of Japan. There is a lot of snow fall but the temperatures are very low, around –10C or –20C. However, I’ve spoken about this with Finnish journalists earlier this week who told me they often see –30C or –40C, so next time I’ll go to Finland to do that job.

TB: What did you work on before this project?

YI: I started my career at Mitsubishi in 1991. My first project was called AYC (active yaw control), which was installed on the Lancer Evolution. I was with Mitsubishi for 14 years and I also worked on cars like the Pajero and the Super Select system. The enjoyment I had from working on these projects has carried through to my current work.

I have been at Toyota for 11 years and have been working on the traditional all-wheel drive systems on the RAV4, as well as Lexus models.

There is a lot of potential in the new hybrid all-wheel drive system, so we’re excited to continue exploring that.

TB: What are you working on next?

YI: What we are trying to develop is a plug-in hybrid system that has the potential to give a lot more power.

TB: What cars do you drive yourself?

YI: I am lucky that I have been able to drive some very interesting and fun cars during my career, although I do not own any sports cars myself. At the moment I own a Prius and use a Lexus NX as my company car.