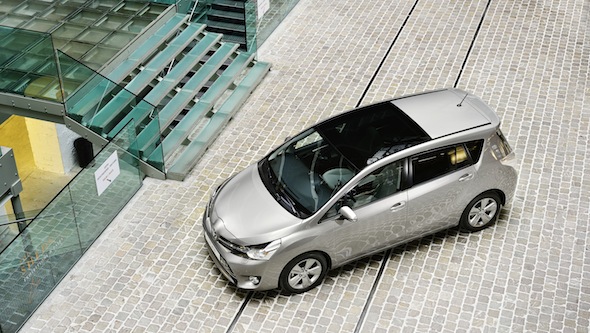 The Toyota Verso compact MPV will be the first Toyota model to use a new 1.6-litre D-4D diesel engine sourced from the BMW Group, when order books for the revised model open in February next year.

In addition to the new engine, the style-conscious ‘Trend’ grade first seen on the Yaris supermini will join the Verso line-up, and equipment across the range is overhauled.

The new 1.6-litre BMW-sourced diesel engine has been extensively revised by Toyota’s engineers. A newly-developed dual-mass flywheel has been fitted, along with revised engine mounts, and redesigned electrical interfaces. It is mated to Toyota’s six-speed manual transmission, and will feature stop-start – a first for the Verso.

Combined cycle fuel economy is 62.8mpg* – representing an eight percent improvement over the previous 2.0-litre engine. Further bolstering the powertrain’s money-saving credentials, are tax-busting CO2 emissions of 119g/km* – 10g/km lower than before. The new engine is available in the 2014 Verso alongside the established 1.6 and 1.8-litre Valvematic petrol units.

In addition to the new engine, the 2014 Verso gains the design-focused Trend grade – first seen on the Yaris supermini. Slotting into the range between the Icon and Excel models, Trend variants feature a black C-pillar decal that creates a floating roof effect, along with five-spoke alloy wheels, front fog lamps and rear privacy glass.

All versions of the new Verso, except the entry level Active model, are equipped as standard with the latest version of Toyota’s touchscreen-operated multimedia system, ‘Toyota Touch 2’. Toyota Touch 2 is comprised of Bluetooth, a rear-view camera, vehicle information such as trip data, and climate control settings.

The 2014 Verso can be ordered in a new Avantgarde Bronze paint finish, with new cloth upholstery in black or grey^, and a new leather trimmed gear knob.

Prices for the new Verso will be announced early next year. In the mean time, you can find out more about the outgoing car, and the rest of the Toyota range on the Toyota UK website.

*Figures quoted prior to homologation ^Grey trim available as an option