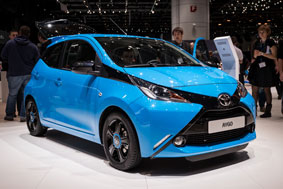 When the wraps were pulled off the all-new Toyota Aygo, a total of 12 models were revealed on the Toyota stand at the Geneva Motor Show, perfectly showcasing the range of customisation options available for the new city car.

We there to capture the cars in all their glory, while senior Daniele Schillaci, Vice President of Toyota Motor Europe, introduced the world to the new AYGO. Here is what he said:

‘Since we launched the original Aygo in 2005, it has been a winner for us on many different levels. It has done wonders for our brand, attracting younger drivers to Toyota, and adding them to our loyal customer base.

‘It has led the way in delivering outstanding value, thanks to its quality, low cost of ownership, and its high residual value. So when it came to developing the new Aygo we had a very solid base to start from.

‘But we wanted more, so we asked ourselves: “How can we make a difference in this part of the market?”

‘Our goal was simple: to make the new Aygo the ultimate icon of playfulness in the marketplace; a car that would be loved by a new generation of drivers.

‘We took the lead from Toyota’s President, Akio Toyoda, who is constantly striving to make cars ever more emotional and fun. From that foundation we turned to Japanese youth culture for a unique way of bringing fun to the A-segment.

‘We believe that we have made a car that makes its owners proud, that they can make truly theirs, and a car that enables the owner to have fun. You will be able to judge whether we have succeeded or not. But as you can see, the new Aygo’s strong stance and solid good looks tell you that it means business – even if it is fun.’

‘For the design, we challenged ourselves. The daring x-shape that defines the front could only be achieved by using projector headlamps, a rarity in the segment. New Aygo was also designed with customisation in mind from the very start. This approach will allow buyers to build and select the Aygo that best matches their personality, and to have fun creating their very own Aygo. There is such a choice on offer!

‘Now, of course, customisation is not new. But we have done it ‘The Toyota Way’ by making it easy for the customer to understand, easy for the dealer to implement, and affordable as a result.

‘This playfulness is everywhere in Aygo. It has been translated in our line-up by combining special versions with personalisation packs, which reflect what we think are the best-looking Aygo variations. They will allow 90% of customers to find their match. Beyond that, true individualists will still be able to stretch customisation further, and tailor each and every part to their very own taste.

‘Ladies and gentlemen, the wonderful new Toyota Aygo reveals the changing face of Toyota. Its task is very simple: to put smiles on the faces of its owners by enabling them to have… fun!’